Thank you to the kind folks who continue to support me through purchasing these comics, or through my Patreon. My financials are quite rough especially during these times, so I appreciate your help and support. Thank you <3

I currently don't have any program to optimize the PDF, so if you'd prefer not to download that large file, the HiRes zip file contains all of the separate hi-res JPGs as well!

I wanted to take a small break from making books to finish something small, but this kinda blew out of scope and took me a week and a half haha! I hope you'll enjoy! I'm extremely amateur at playing the Ukulele still so I couldn't play the chords I wrote super well, but done is better than perfect!

Your story is so touching in many ways, and interesting story telling

May I ask which platform did you use to create this kind of interactive story? Thank you so much

I want to thank you. I read “Landmarks” on OJST today and I remembered I had “It will be hard” on my reading list for a while, so I read it, and then I played that hugging simulator, and read the bear bringing soup to the dragon and then I played this and by now this is the fifth time I cried while reading/playing art made by you. This is the most I felt connected to anything for the past year, and it feels so good to feel something, especially when this feeling connects me to myself and the world around me, and even though I’m alone on New Year’s Eve (still 31st Dec, 9pm on my timezone), I feel warm and cozy and not lonely anymore thanks to your art. I don’t know if you read comments, but I just wanted to tell you how much this meant to me. I can’t wait to read more of your comics and see more of your wonderful art. I hope 2022 brings you all the joy and warmth you deserve. Take care.

This is the pick me up I needed today. Depression has been hitting me hard today. Thanks to the creators for making this.

I've noticed that game in connection of a recent user's rating appearing on my dashboard, I like it's grey-ish background & the title sounded like there could be fun when playing it.

I like that game being described in the short textline by using html5 and it's cool to be playable on browsers.

'click to continue'
could maybe get coded in bold-letters? I'd like if just that line being clickable & maybe see a custom cursor somehow?

Nice selfie-kawaii/pose of that bear there, cool dragon's mane/haircut and off that both char's do have similar size as claws/nails too? Same as them being approx. in same body-size but if the dragon shoots polaroid-pics, he looks bit smaller?

Chill/ambiente music (adorable when the voice starts, I like those more than just the instruments before), cool drawing/storyline/camera-angles. 'clik' ...could there be a possible typo after that bear jumped off his dragon pal's back?

Fav. scene so far: dragon snapping that pic and it's printed.
Could there be a "skip/back to chapter" or "prev./next"-button?

That was a very sweet comic! Thank you!

thank you for this <3

wonderful. well worth the time to read and listen, and in fact a work I can tell I'll return to periodically. 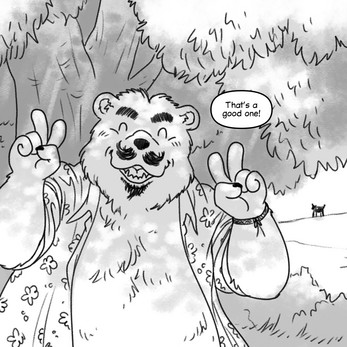 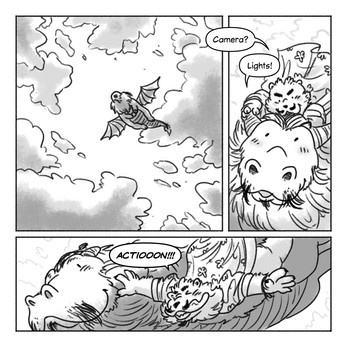 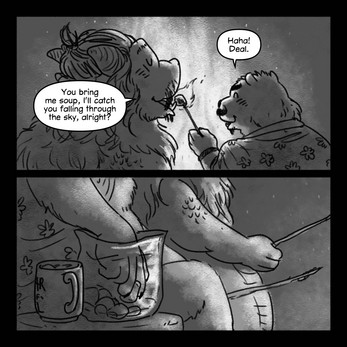 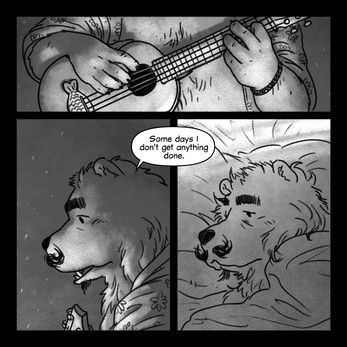